Many years ago, in a piece I wrote for M-U-M,  I described my good friend Tony Brook (aka Anthony Darkstone) who is also our Director of International Operations as “magic’s hidden treasure”. My description was very apt. Since then, he has supplied us at MWC with many interesting articles. Some of us are familiar with the term, “underground” and its application to Magic. This time Tony has given it a new connotation, as he has literally been underground performing magic in a Norwegian silver mine some 3 miles below the surface.

Steve Dacri, Editor VegasInsideTips.com
CEO & President Magic Web Channel
This is also referred to on : http://www.magicsam.com/international.asp
The Norway Chronicles
By Anthony Darkstone Brook
SAM International Deputy
Director of International Operations – Magic Web Channel
I had thought of calling this piece The Norse Saga but figured it would have been a touch over the top. However, viewed from my personal and subjective perspective it would have been just as apt.
As is often the case in our business, you meet people, you work together on the same bill and somehow you just click. I first met Kristine of Norway some years ago at a major convention in Portugal and she impressed me with her style, her elegance and a very creative presentation.
We often read and hear about the therapy of magic and how it benefits those who are ill. It more than applies to her. Her story so far reads like a film script. Diagnosed with cancer in her early teens, she decided to fight and used the art of magic as a tool. Encouraged by her devoted parents, she combined harsh therapy and magic including making time to go to Vegas and study under Jeff McBride and Eugene Burger. Both were a huge success. She is Norway's only female Magic performer and highly rated in Europe. Now in her mid 20’s, the even more magical news is that she is now totally cancer free. She now combines Magic with studying to be a Medical

Doctor. Once completed she wants to, not surprisingly, specialize in Oncology.
When Mark Fisken and I were chatting about the mega magical event in Scotland a couple of years ago which was held at Stirling Castle we decided to invite Kristine. It was a smart move on our part. She was on the bill with me, Pat Page, Scott Wells and the late great Ali Bongo. Full coverage on this ( which is worth reading) can be found in an exclusive MWC article entitled, "Stirling Castle" elsewhere on this site.
We have, since our first meeting become good friends and as often happens with Magic there are no age barriers. An added bonus is that I have also become good friends with her parents who are very Magical people in their own way. Her proud father is also a keen magic hobbyist. Her mother is a Priest. Incidentally, it is a wonderful testimony to the Spirit of the Norwegian people that women are encouraged and indeed widely accepted as Clergy. On a more personal note, I was very honored and privileged when I was invited to attend a service officiated by Kristine’s mother in a centuries old church. A very warm and truly moving experience. A very magical experience in a different sense.
Last year, Kristine decided to host an informal get-together in her home town of Kongsberg (some 2 hours from Oslo) and had a great evening of fun and magic with other magical friends including Bob Sheets and Lennart Green.
This year she decided to up the ante and throw a mini-gala show over two nights. The location for both was a centuries old silver mine. I had no idea that they had silver mines in Norway and when she first invited me I thought I was having my leg pulled about the location!!!! 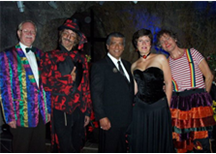 However, this was not the case, we did indeed perform some 2.5 kms underground in an abandoned silver mine!  Interestingly, the Norwegian Government has taken over the location and turned it into a major tourist attraction. It is complete with a train ride underground to the Events area. There are daily tours of the mine and on occasion, there are events complete with dinner and cabaret shows. All conducted in a huge area completely hewn out of rock including the stage!!
I will stand corrected if necessary, but to the best of my knowledge, this has got to be a first ever for "underground " magic !!!! Quite literally, 2.5 kms beneath the surface of the planet.
Moving audiences, equipment, props, artists etc in mini-carriages with pull-down seats 2.5 kms underground is quite a magical feat in itself. Nevertheless, all was accomplished with flair and precise expertise, thanks to Halvor "Hal" Saelebakke, the Events Manager and his excellent staff.  Everyone working there was very pleasant, extremely helpful, and very efficient.  Everything worked like clockwork and ran smoothly with no hitches. A real joy for all the artists and indeed for me personally to work with such professional people. We made a great team.
I have been to Finland, Denmark and Sweden and indeed enjoyed working with our Scandinavian friends and colleagues but it would be remiss of me if I did not especially point out the very gentle and wonderful ways of the Norwegian people and in particular the folk in Kongsberg.
On the bill for the first gala show was Kristine, Dr. Anthony Darkstone, Ray Speedy, Knut The Clown and the well-known Scandinavian Ventriloquist Herman Berthelsen who also acted as Emcee. Knut thrilled the audience with his clown antics, uni-cycle riding, fine juggling and clowning. Although it was my first meeting with Ray Speedy, as sometimes happens in our business , we became old friends in 10 minutes. What a pro! He is the epitome of a modern Jester. Originally from Denmark, he has made a very positive impact on the Scandinavian Entertainment scene. His highly visual and very funny antics had the audience in stitches of laughter. His high energy and Entertaining act would play well anywhere, anytime. It was reminiscent of the star quality of the late Ali Bongo’s “Shriek of Araby”.

Dr. Anthony Darkstone had the task of following that, but the experienced and very knowledgeable Herman Berthelsen as Emcee smoothed the pace and created just the right ambience prior to introducing Darkstone. 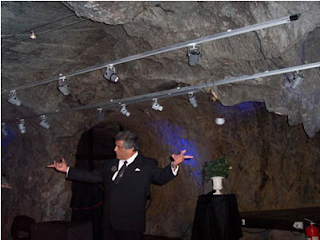 The mysterious setting of a room hewn out of solid rock was the perfect setting for Darkstone's very perplexing demonstrations of Extreme Coincidence, ESP and Telepathy. The very suave and 21st Century sorcerer character of Darkstone benefited greatly from the excellent environment of underground rocks and the possible home of a Troll or two!!!!
I have seen Kristine perform before and she just gets better every time. Winner of several awards and more recently, she did another  Royal performance for the King of Norway , who incidentally was so impressed that he especially requested to go backstage and meet her.  Great music, excellent choreography, her highly theatrical magic captivated both young and old alike. Very graceful and elegant, she flawlessly delivered some high impact excellently themed magic and received tons of applause for her efforts.
The second gala show was more in the nature of an after dinner Cabaret show for a private party. The audience was mainly friends, other Magicians and their guests. Once again, thanks to the efforts of the fine staff at the mine, all ran like clockwork. From an artistic viewpoint, I am very pleased personally and want to publicly thank those involved with the light and sound for providing outstanding help on both nights. 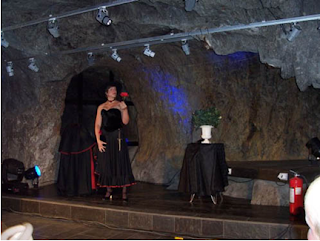 The after dinner show featured Kristine, Darkstone, Ray Speedy and a Close-Up magic act by Rune Carlsen, a 2009 FISM competitor.
Special mention and thanks must go to Margrethe and Jorn Hjulstad for their help with many essential tasks in the background. From preparing food, transport logistics, and even on occasions physically carrying props! They were invaluable by providing all those pre-performance and backstage items of help that give a performer the freedom to give an outstanding performance.
Margrethe also ensured that I was kept cozy and warm in a down filled long jacket for my journeys to and from the mine. She also ensured my potassium and energy levels were maintained by always having a banana available!!!! Jørn ensured I kept “warm” above ground by bringing out his best Aquavit (a Norwegian version of vodka) and beer!!!
I have been extremely fortunate to have been in show business for many decades and indeed have been to many wonderful places and have performed internationally at a great many different venues but I have never performed underground in the literal sense. The mines in Kongsberg will be firmly cemented into place as one of my most cherished memories. It may be a former Silver mine but will always remain a Gold Star location in my book of wonderful experiences.
Prior to leaving Norway, I was fortunate to see and read the reaction of the local media who wrote some very glowing comments replete with great photos. A very fitting conclusion to a wonderful Nordic saga.
Magisk tryll i Kongens Gruve- LAAGENDALSPOSTEN 17 Juni 2009

Magicians  To Thrill in Kongsberg.  Norwegian newspaper showing a double page spread of Dr. Anthony Darkstone and Kristine with fans at the entrance of the Silver Mine 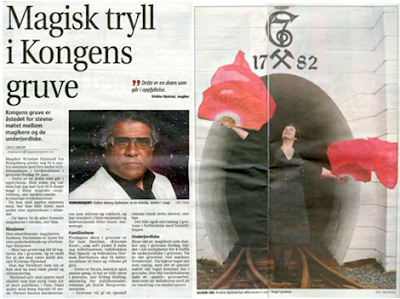 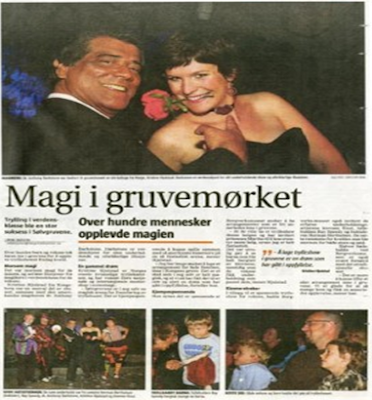 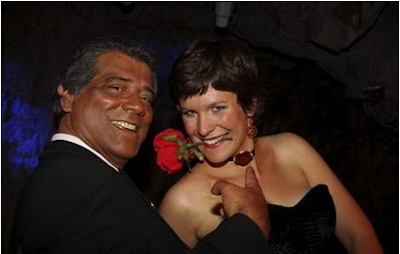