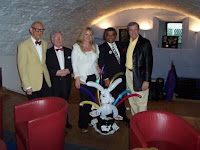 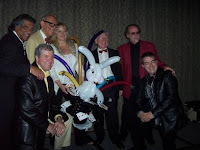 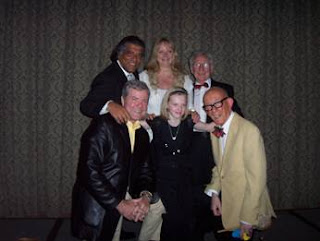 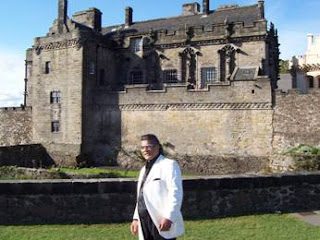 Prior to this year’s Event a series of competitions involving schoolchildren was held. Entrants had to perform magic and write a brief essay. The theme was based upon why they wanted to learn Magic and also be schooled by Ali Bongo. Heats were held and finalists chosen. The weekend began on Friday evening at the Castle to find a worthy apprentice to Ali Bongo. Inter woven with performances by Pat Page and Ali Bongo young entrants performed their magic that was assessed and judged by Scott Wells, Tony Brook ( aka Anthony Darkstone)  and Pat Page.
Alex Procter did a wonderful job of introducing the acts. The winner was 10-year-old Mark Campbell. A close 2nd was 11-year-old Christopher Dunn. Both from Stirling. Although she was not in the competition per se, 11-year-old Patricia Duncan impressed the judges with her skill and stage presence. She was invited to perform, as she had wanted an honest assessment of her act. The judges concurred that she was most definitely one of the rising stars of magic and a great performer in the making.
On Saturday and Sunday, various shows took place at various locations in the Castle. Performing at The Gallery of Wonder (Chapel Royal) were Alex Procter, Dr. Anthony Darkstone and Kristine. The Emcee for their shows was the legendary Pat Page who wove his own spell of excellent Magic not only during his introduction of the acts but also when he gave the audiences an excellent act of his own to close each day. I’ve known him for some 37 years and was privileged to work with him before at The Palace of Magic in Falkland, Scotland a few years ago and I am delighted to state that, like fine wine, he just gets better and better.  I must confess that although he has taught me much and shared his methodology with me I am still in awe and amazement at his performances. A true Magician that has gone beyond mere excellence.

Alex Procter, looking every inch a modern magical performer did his fair share of excellent magic that left audiences cheering and clapping for more. Alex is one of the few performers on the magic scene today who meticulously pays a great deal of attention to his visual on stage and his sartorial elegance adds more than a touch of excellence to his riveting magic. Kristine of Norway, a beautiful and enchanting young woman in her mid-20’s wooed and mesmerized the audiences with her crisp delivery, flawless skill and sheer charm. A former student of Jeff McBride and Eugene Burger, she gave stunning performances as she created three separate characters but still remained her magical self within each and treated the audiences to some thrilling and stunning theatrical and visual magic.
Described as a Sorcerer of the 21st Century, Dr. Anthony Darkstone created mysteries and magic of the mind and entertained with illusions of reality as the audiences sat enraptured with his performances of ESP, Telepathy and Extreme Coincidence.
Performing at The Great Hall of Magic ( The Great Hall) were Kevin McMahon, Shirley Ray, Ali Bongo and Kramus Nexifius. None other that one of Magic’s leading Emcees, the charming Scott Wells, masterfully and superbly introduced the acts. I’ve known Scott for over 10 years, spent many a great time in his company socially and professionally, and can unequivocally testify to his skill as a magician and an Emcee.
I was personally especially delighted to see that two people, whom Dan Garrett and I had featured in World Class Magic, namely Kramus Nexifius and Scott Wells were not only on the same bill but also at the same location performing together.  Not surprisingly, many complimentary remarks were made regarding Scott Wells’ Emceeing skills. 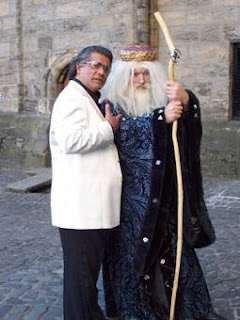 Kramus Nexifius was his amazing 2,500 self with yet another wonderful costume. Over the years, his costume designer has hand-made some marvelous costumes for this remarkable wizard but this year she excelled herself with the detail and symbolism. I have in the past, publicly expressed both personal and professional admiration for the character Kramus Nexifius that Mark Fisken has created. How the character came about is an interesting enough story for an article entirely on its own. If they gave Oscars for Magical characters, Kramus will be a clear winner. I cannot pinpoint exactly how he does it but Mark has given Kramus a simultaneous appeal to children and adults alike. How does he cast his spell? I have no answer, only guesses.
Apart from being an excellent Award winning magician, Shirley Ray is one of the nicest people anyone could meet and is an internationally respected and highly acclaimed balloon artist. Royal Sorrel and Ori Livney, both of whom are leading International Balloon Artists, have told me that they rate Shirley very high in the world rankings. Not only did she give outstanding performances but single-handedly ran Balloon Magic workshops in The Royal Apartments. An extremely popular item as crowds were queuing up patiently on both days to take part in the workshops. Given her family background and indeed her wonderful personality, it is no surprise that she is so popular and talented.
Ali Bongo, who has had every superlative added after his name created more of his own unique and jaw-dropping magic that he has earned him his International fame for over 60 years. I have known him for several years, spent quality time with him socially and have worked with him before. I will simply add that his charm, graciousness, knowledge and willingness to help and guide just seem to be never-ending. 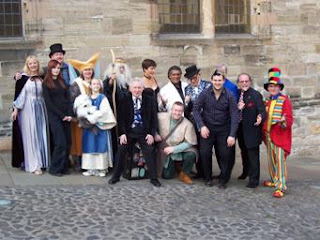 The Realm of Enchantment ( The Queen Anne Gardens) featured Mick Magic ( Mark Fisken), Alex Procter, Alissa Aladino, Prof. Hilarius Kautz, Maggi Clowin and David Lees. Keeping mainly to Children’s Magic as their theme, they performed their hearts out much to the delight of thousands of children. The future of magic was assured as the very capable and knowledgeable Professor Hilarius Kautz gave fascinating lessons on the Art at his Magic school to literally hundreds of young, keen and eager future magicians. Helmut & Doris Kautz are dedicated performers and truly understand the finer concepts of show-business. I have worked with them before and it was a real pleasure to see them again. I am especially indebted to Doris, who is an excellent Face-Painter, for creating the make-up for my character of Zadok- Keeper of the Seal of The Ancient Magi. 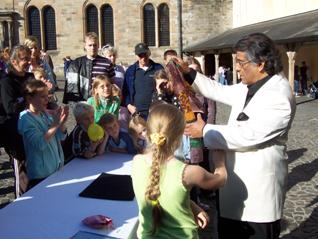 Throughout both Saturday & Sunday, between performances, Mike McMillan, Kevin McMahon, Kramus Nexifius, Ali Bongo and Dr. Anthony Darkstone got up-close and personal by meeting with the crowds milling about in The Magic Square. They stopped to chat and show them some strolling and Close-Up Magic. 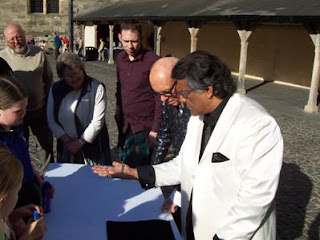 One excellent unrehearsed magic moment occurred on Saturday when Dr. Anthony Darkstone and Ali Bongo began turning, twisting, knotting and unknotting keys amidst gasps of astonishment and thunderous applause. A “double” act that was a once in a lifetime experience. I’ve had Ali Bongo Emcee me in past, congratulate me on a performance but I’ve never ever done a joint “act” with him. Yes indeed, an absolutely once in a lifetime experience!!


Many people made this event a success. Special thanks to the Events staff, the Tech crews and photographers who all did a wonderful job.  I must add my own personal thanks to Kathy Wells who not only took many excellent photographs but was also a real big help in ways too numerous to list. It also included “box-jumping” in the trunk of a small car!!! That’s a story for over a drink in a bar sometime!
My personal thanks also to my good pal Alex Procter who took care of my Transport logistics and even found time to ensure that I left with a  “liquid” souvenir of Scotland.
Did the Sorcerers excel?  Judging by the complimentary remarks, the audience applause and their obvious enjoyment the answer is a resounding  – Yes! 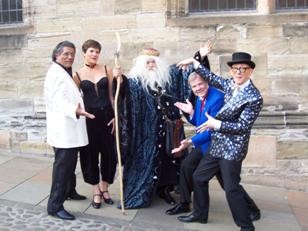 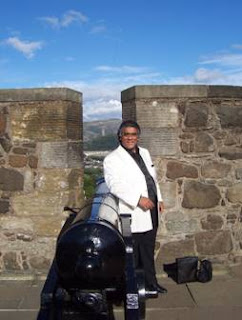 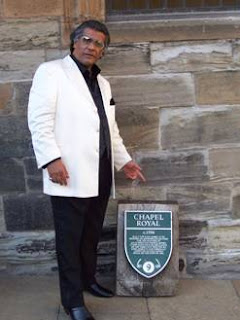 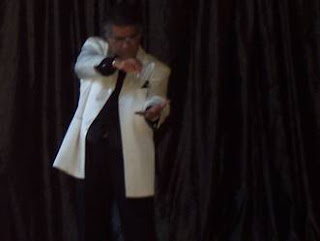 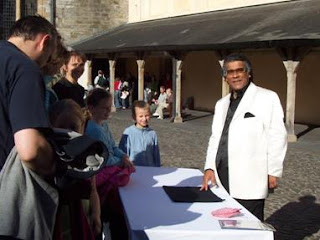 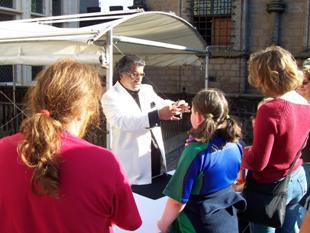 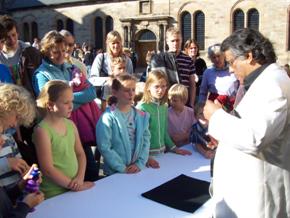 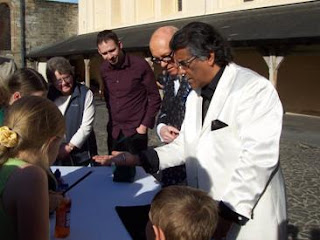 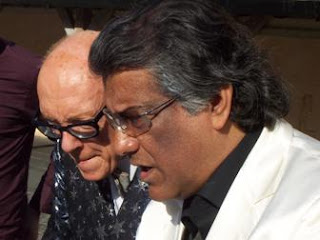 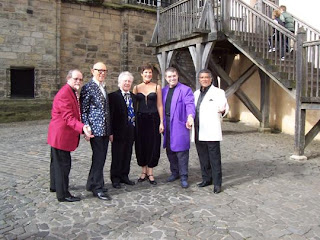